After every school shooting, the left comes out of its gun control caves and does their same old gun control dance every single time it happens. It’s like clockwork- before the bodies are even room temperature the leftist talking heads start chattering away on social media and cable news. We see countless anti-gun marches and town hall meetings where they cry, stomp their feet, and flub even basic facts about guns and gun ownership. And, of course, talk down to their social inferiors, the conservative gun owners of America. Why do they do all of this if deep down inside, they know that they won’t be able to get rid of guns? Heck, many leftist gun control advocates admit this. So, why do they do it? Because their crusade was never about guns, but about their hatred for conservative America. 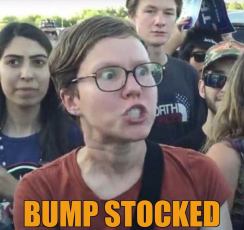 (This is every leftist trying to talk about guns. And by talking I mean screeching.)

Think about it- how many of their anti-NRA tweets and statements have any basis in reality? Many liberals think that the NRA is a government program (it’s not) and is one of the biggest lobbies in DC (it’s not even in the top 50 lobbyists). They get gun facts really wrong. I would suggest reading Tom Knighton’s posts at Bearing Arms for more info on the left’s complete break from reality on guns (Tom Knighton- Bearing Arms). The leftists must keep up pretenses, because they know the right is right about guns. Oh, and the left can’t meme for crap about guns; they can only do mean and vicious racial and ideological stereotypes that aren’t funny. The anti-NRA memes out there are just angry invective with no real attempt to BE funny (in the meantime, the anti-gun student activist David Hogg just picked a fight with 4Chan and /pol/. Dis Gun Be Gud).

1. The left desires power above all else. Power to control culture, politics, and the future. They want to control culture and cannot do that while the right exists. Guns are a big part of the right’s cultural structure and a part of their ultimate defensive fallback option. The left can’t bully the right when conservatives have a near-total firepower monopoly over them. This, of course, is a major problem for the left’s march through American (and global) cultural institutions. At some point, the left can’t get past its own cultural inertia, and they hate it. 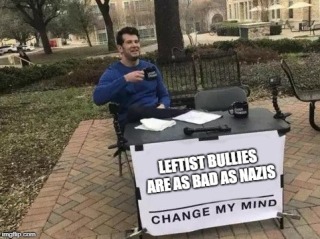 (Note: Most leftists don’t realize that their goals aren’t that different from fascism.)

2. They know that spree and school shooters don’t fit the conservative (or libertarian) gun owner profile. Most spree and school shooters are emotionally disturbed and don’t fit into any neat left/right political spectrum (although I’ve noticed that a good number of them were disturbed leftists). The left simply dumps their own cultural fears onto conservatives because they’re an easy target. This is made easier thanks to the media’s anti-gun/anti-conservative platform.

(
(This is how the left views guns- and why they fear gun owners on the right.)

3. The left needs to view the right as bad guys in order to win. Leftists have spent decades building up this mythos that the right are a bunch of racist inbred hicks straight out of the movie Deliverance. Leftists, especially those from the northeastern and Californian enclaves pretend that they’re morally superior to the South, which gets to be the stand-in for the right. How are southerners portrayed in the mainstream leftist cultural media? It’s a constant stream of cultural stereotypes that portray the south and conservatives as Bible-thumping hick Christians who are racist, sexist, and homophobic™. And they must be stopped at all costs! #Resist!

(At some point leftists should actually read some history books on Nazi Germany.)

The problem, for the left, is that conservatives routinely win elections. How could that be, if they’re racist, sexist, homophobes™?! The left’s paradigm has turned out to be a massive trap for the left, because it requires the left To Be Right All The Time. Hillary was supposed to be On The Right Side of History! Trump’s election proved (once again) that the left badly miscalculated on the nature of America’s political culture- right when the left thought that they would win a landslide election and were already popping the champagne on election eve. The left cannot deal with the fact that they are often very wrong about America and the future. That’s why they have had an extenuated national temper tantrum since the 2016 election. They aren’t used to hearing the word “no” and “screw you.” The left has to find a way to win, even a small victory. And it’s been slim pickings since the 2016 election.

(The left did not handle losing the election well. At all.)

Thus, the left will take manufactured wins if they can get it. After every shooting, they stage anti-gun protests, marches, and town hall meetings in order to beat their chests about how much they hate guns…and conservatives. Shadowboxing against the right is about all they can do- fighting against pretend straw-man conservative opponents with a pre-determined “win” for the left. It’s a sign of leftist pride to fight against guns because it gets them to be as mean to conservatives as they want to be and get away with it. And they lash out at conservative gun owners because they know the left will never win- and it exposes the weaknesses and sore-loserism of the left for everyone to see. Indeed, when it comes to their anti-gun crusade the left has no clothes, and they know that everyone can see how ugly they really are.

(You can trust her not to take your guns.)